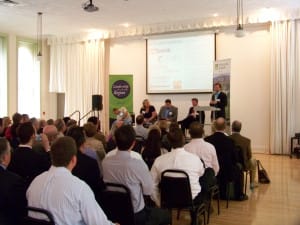 In the second in the four-part Building Healthy Places series, ULI St. Louis and FOCUS St. Louis brought together community leaders and developers from across the region to discuss the regeneration of our communities.

The panel discussion, moderated by Vince Schoemehl, former Mayor for the City of St. Louis and President & CEO of Grand Center, Inc., took the audience down the path of rebuilding city blocks in Ferguson, forming districts to promote healthy businesses in the Grove, and opening the door to a brand new community in East St. Louis.

Mayor James Knowles of Ferguson, Missouri, outlined his city’s efforts to address the dying retail corridor along Florissant Road, starting with a Master Plan to retain current residents, attract new residents and create a sustainable community from both a social and economic perspective.

In pursuing this plan, the city has also taken great steps to address failed businesses and remove or replace deteriorating buildings and encourage new development, which are designed to fit into the existing fabric of the neighborhood and capable of housing both commercial enterprises on the lower levels and residential lofts above.

Looking to provide the assembled audience with key takeaways from his experience in Ferguson, Mayor Knowles had this to say:

“Clean up the blight, beauty sells, give them something unique, and believe in it, they will come.”

Amy Gill, CEO of Restoration St. Louis, built on Mayor Knowles message, yet added specific economic development tools her company has used to help bring particular neighborhoods within the City of St. Louis back to life. For Restoration St. Louis, the company has led efforts to redevelop buildings in the Delmar Loop, Grand Center, and the Grove. In each of these instances, the company took a building-by-building approach, nurturing the restoration process while carefully evaluating how the building would fit back into the fabric of the community. In the Delmar Loop, a special business district was formed to further support incoming businesses which would benefit the economic health and long-term viability of the re-emerging neighborhood. These same guidelines also prohibited certain “predatory” businesses from establishing a more temporary location, often taking advantage of populations in flux.

“The Grove is much more than a collection of rehabbed buildings; it’s about building a neighborhood block by block.”

“These ‘building blocks’ are the foundation upon which great cities thrive,” said Amy.

For Restoration St. Louis, branding has also played a key role throughout its work in each neighborhood. Starting with a rather rough area formerly known as Forest Park Southeast, the developer identified the need to create a fresh identity for the neighborhood. Building on its history as Adam’s Grove, a former racetrack that once sat in the same spot, “The Grove” was born and a new identity was shaped. With support from outside organizations and its board, the CAC is making strides, most recently formulating a master plan to redevelop four city blocks into parks, sports fields and safe and welcoming spaces for kids and families to gather, play and grow.

“We have the vision,” said Chet. “And we have the plan. We just need your help.”

This theme of Building Healthy Places can translate into so many different meanings and take any number of different directions in its implementation. At the very basic level, however, it may just be what Chet has in mind – giving kids a place to run and grow and, in turn, building and nurturing our built and natural environment when they grow up and find themselves in charge.