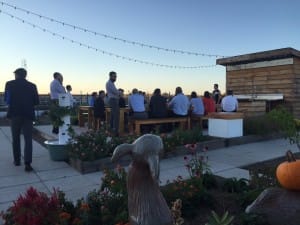 A growing national trend, urban and roof top farms are gaining traction here in St. Louis – demonstrated in the first rooftop farm, a Metro bus converted into a mobile farmer’s market, and dedicated support from the City for sustainability driven projects.

This follows recent years where backyard production has risen, farmers markets’ have expanded the local food market and St. Louis saw its first row-crop plantings in the city limits since the 1920s.

A recent ULI St. Louis program, led by Josi Neilsen, dove into this topic by inviting guests to tour FOOD ROOF Farm, a project by UrbanHarvest STL, and hear from Executive Director, Mary Ostafi, how the pieces came together and the organization’s vision for the future.

Adding to the conversation were comments from Jeremy Goss, Founder of St. Louis Metro Market, Gibron Jones, Co-Founder of HOSCO Foods, and Cara Spencer, Alderman for St. Louis’ 20th Ward. Michael Allen, Director of the Preservation Research Office, moderated the discussion and tee’d up some provocative questions for the panel and assembled guests. 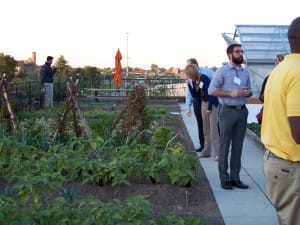 The powerful combination of vacant land around St. Louis and similar cities and a growing demand for locally grown and organic food brought this topic into the national spotlight – a recent New York Times article featured the work of UrbanHarvest and the 2015 ULI Fall Meeting, for the first time, incorporated a discussion about the intersection of food and real estate development.

If you were at the St. Louis tour, you know the story. Check out the photos here.

If you weren’t there, you should have been. Click here to see who attended – reach out to one of them and learn more.

The case study provides readers with an in-depth look into the planning and development of this mixed-use project.