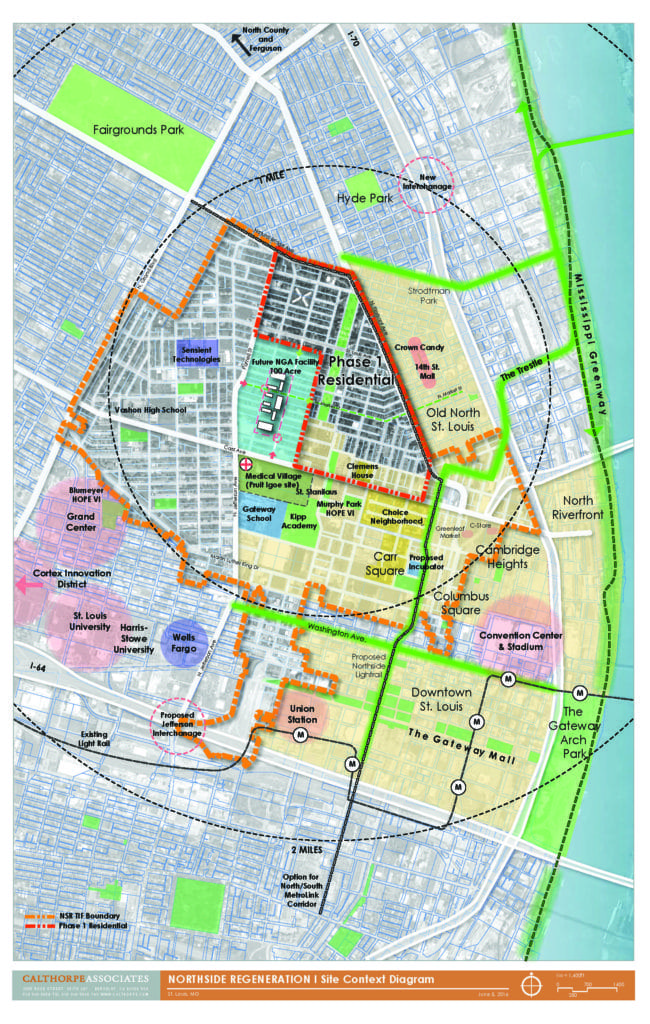 In November, 2013, ULI St. Louis hosted a discussion among real estate professionals about development in North St. Louis. Yesterday, those discussions took another turn toward reality with an announcement from Paul McKee’s team.

Below is the release:

This first phase of residential development at NorthSide will include ownership and rental apartments, houses, and live/work lofts, and will be located in a 50-block area bounded by St. Louis Place Park, Cass Avenue on the south and North Florissant on the east — immediately adjacent to the eastern edge of the 100-acre site that has been designated by the federal government for the $1.75 billion, 3,100-job National Geospatial-Intelligence Agency new HQ.

The initial phase of residential construction is anticipated to commence in 2017, for a 2018 completion.

In anticipation of the mixed-use NorthSide Regeneration Development, the development team has been working with leaders at the AFL CIO Housing Investment Trust (HIT) for the past 2 years.  In recent years, the $5.8 billion HIT has invested over $500 million in financing urban residential developments in St. Louis.

Telesis, which has supported neighborhood transformations in more than 25 cities throughout the country www.telesiscorp.com has earned a strong reputation for addressing the diverse elements of community-building:  from distinguished architecture to beautiful, perennial landscape design; from low and moderate income housing to market-rate homes; from market-supported retail centers to cultural and health centers, from office space to day care, and learning centers.

Commenting on the St. Louis development, Telesis Founder and CEO Marilyn Melkonian noted: “Successful neighborhood regeneration is founded in partnership with the community, its residents, civic and cultural leadership, strong public and private partners — all embracing a vision of a beautiful and civil community and working together to bring it about. We are pleased to be part of the NorthSide Regeneration partnership with great St. Louis urban pioneers.”

The co-development partnership joins Telesis Corporation, a nationally-recognized and national award winning urban residential and community developer, with the long-standing successful commercial development partnership of Paul McKee, Bob Clark and Larry Chapman, which has developed the 550-acre NorthPark, the HQ of Express Scripts in St. Louis County over the past decade.

Calthorpe Associates — widely regarded as one of the nation’s most influential urban design firms involved in improving communities, and founders of the New Urbanism movement — has been engaged to assist the NSR Residential Team in planning and design aspects of the residential development. Calthorpe has been involved in a number of Telesis developments.

NorthSide developer Paul McKee, CEO of M Property Services, commented:  “ We are thrilled to be moving forward in this venture with both Telesis and CRG in the residential portions of this transformational development at NorthSide Regeneration.”

CRG’s Larry Chapman underscored the market for residential at NorthSide and the adjacent CORTEX, Grand Center and Downtown Districts.  “In December, we commissioned an independent housing market analysis by a national firm with extensive residential market feasibility experience in St. Louis and numerous other urban areas.  Zimmerman Volk Associates (ZVA) concluded that there is a demonstrated demand for at least 500 market rate housing units at NSR over the next 5 years.”

He further, pointed out, “This market analysis did not include an assumption of the recently-recommended $1.75 billion NGA HQ being located in the heart of the NorthSide 1,500-acre district, which will only enhance this market demand.”

With regard to both the near term and long term benefits of the new NGA HQ at NorthSide, McKee pointed out: “Our lessons learned in successfully developing mixed use developments at WingHaven and NorthPark are several: 1) a developer here must be patient and have a long term perspective, and 2) to be successful, it is essential to recruit catalytic major employers — such as Master Card in WingHaven and Express Scripts at NorthPark. At NorthSide Regeneration, the NGA headquarters is that major anchor employer.”

“Once the NGA HQ is completed, the thousands of NGA employees, as well as employees in Downtown, Grand Center and at CORTEX will have the option to walk or bike to work from their homes at NorthSide.”

In recent months, several other related developments (in addition to the new NGA HQ) have also been announced at NorthSide Regeneration, including:

Is St. Louis Ready for the Autonomous Car Revolution?

Join us Thursday to learn about autonomous vehicles and more.